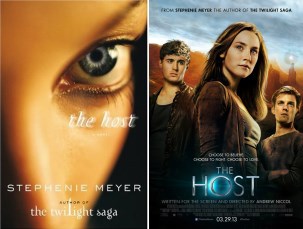 It’s often said, ‘Do no judge a book by its cover’. Along with that, I say, ‘Do not judge a book by the author’s previous book.’
Having said that, ‘The Host’ is one of the coolest books I have read, by Stephanie Meyer. Right, so I am not going into detail about the Twilight series and I am not stating my opinions about that one either. But irrespective of whether you liked that saga or not, if you’re a fantasy lover, you’ll like this book.
The book follows the story of aliens from a species that travels from one world to another, inhabiting the bodies of that world’s living things. Having now come to the Earth, these ‘hosts’ realize that humans are one of the only species across the universe that have such powerful emotions. This is the problem that they face. These strong emotions, often provide resistance to the souls attempting to inhabit the body.
Basically, these hosts inhabit the minds of the people, taking control of the body. Once control is taken, the mind of the human fades away to the subconscious and then disappear forever. All of this, of course, depends on how strong the human is emotionally.
So coming to the protagonist, there are two. The human Melanie Stryder and the host who comes to be known as Wanderer. Wanderer is put into Melanie’s body. But she wakes up to realize that Melanie is still alive in her mind. While Wanderer attempts to get information about humans who may still be alive and hidden, Melanie, in turn, attempts to bring Wanderer over to this side, by showing her the love that Melanie feels for her mate Jared and her younger brother Jamie.
Ultimately, the situations they come across together end up making them seek an ally in each other. Slowly, they begin to trust each other.
Whether Melanie divulges her secret, whether wanderer finds humans alive, and whether wanderer finally finds a place where she feels at home, is what forms the crux of the story.
Having established the story of the novel, I should mention that
Stephanie Meyer has done an amazing job in taking the story through. As often, the movie does no justice to the book other than following the story.

The book, on the other hand, manages to take the readers on a journey of hatred, love, thrill and a lot of fiction.
I loved the book the minute I saw the cover. I loved the author once I read it.
And the story, my-my, the story is one that I wish I could have produced into a movie.
For one, if I ever sit down to write a novel, ‘The Host’ will be my inspiration for the story and the way it’s written.
I’d give it 4.5/5.